The romantic comedy A BREATH OF SCANDAL is set in 1917 at the Habsburg court in Austria. Princess Olympia (Sophia Loren - today, 20 September, is her 81st birthday) falls in love with the American mining engineer Charlie Foster (John Gavin), but her family expects her to marry a prince.

The movie was almost completely filmed in Austria, amongst others at the Schönbrunn Palace in Vienna, where Prince Philip (Maurice Chevalier) lives. Members of the House of Habsburg did actually stay at this palace which served as a summer residence. The most famous resident was the Empress Sissi and the movies about her life were also filmed here. The palace was built in various stages between 1638 and 1780.

At the beginning of the nineteenth century the palace was given its characteristic yellow colour, the ‘Schönbrunn Gelb’. A large part of Schönbrunn is open to the public and in the garden the Schönbrunn Tiergarten is located. Founded in 1752, it is the oldest zoo in the world.

Filming took place between May and July of 1959 and little has changed. Schönbrunn is seen twice in the movie, first when Charlie arrives at the palace and hopes to meet the prince. He arrives at the back entrance and accidentally runs into Prince Philip. The main entrance with the almost identical facade cannot be seen in the film.

At the end of the movie Schönbrunn is seen a second time when Charlie and Olympia drive off together. The final shot shows the Neptune Fountain and the Gloriette. This pavilion was built for diners and receptions. The structure dates from 1775 and, being on top of a hill, offers a panoramic view of the palace and the city.

During our visit I did not know that this movie was filmed here, the photographs of the current situation are lucky shots.

Just as in the first movie, Harry Potter and his fellow students travel in HARRY POTTER AND THE CHAMBER OF SECRETS from London to the Hogwarts School of Witchcraft and Wizardry.

Harry Potter (Daniel Radcliffe) and Ron Weasley (Rupert Grint) miss the train. They try to retrace the train with the car of Ron’s father Arthur (Mark Williams). This Ford Anglia has been enchanted by him and is able to fly as well as invisible. At first, everything goes well. The tracks of the train are easily found until the car almost is being hit by the Hogwarts Express. Harry tumbles out of the car but manages to grab the door and climb back into the car with the help of Ron.

This scene is set on top of the Glenfinnan Viaduct, located near lake Loch Shiel in the West Highlands of Scotland, next to the A830 road. The viaduct was designed for the West Highland Railway. Construction took four years and on 1 April 1901 the line was opened. The 21 semicircular spans are made of mass concrete and carry a single track. The viaduct is 416 yards (380 metres) long, and 100 feet (30 meters) high. The scenes with the flying car were filmed in the fall of 2001 and later added to the scenes of the location shoot. Since there is no snow and the landscape is green, filming was probably done in the spring or the summer of 2002.


The Glenfinnan Viaduct is featured on the Scottish £ 10 banknote. Also on the banknote but not in the movie is the nearby Glenfinnan Monument, a tower raised in 1815 to commemorate the place where Prince Charles Edward Stuart, known as Bonnie Prince Charlie, raised his royal standard on 19 August 1745. On top of the memorial is a statue of an anonymous Highlander, overlooking Loch Shiel. 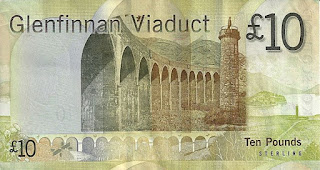 In the third film, HARRY POTTER AND THE PRISONER OF AZKABAN from 2004, Harry Potter again travels by train, passing Glenfinnan Viaduct, to start his third year at Hogwarts. Compared to the first two movies, the tone of this film is more dark and mature.

Sirius Black (Gary Oldman), convicted for murdering Harry’s parents, has escaped Azkaban prison and apparently is now after Harry. He is being searched by the dementors, the guards of Azkaban. These black phantom-like creatures are capable of consuming the emotions and good memories of human beings. One of them forces himself to Harry when the dementors search the train. The new Defence Against the Dark Arts teacher Professor Lupin (David Thewlis) comes to his rescue and repels the dementor.

This scene is set during a heavy rain storm above the Glenfinnan Viaduct, that can be seen briefly when the train comes to a halt. In the background the mountains can be seen that surround Loch Shiel. Besides modern trains The Jacobite, a steam locomotive-hauled train, runs during summer months from Fort William to Mallaig. The route is the same as shown in the Harry Potter-films. The railway company provided the train used as the Hogwarts Express for filming.


The lake Loch Shiel is seen a second time when Harry Potter flies over it on sitting on the back of Buckbeak the hippogriff, a magical creature with the head and wings of an eagle and the body of a horse.

The Triwizard Tournament is the main event in HARRY POTTER AND THE GOBLET OF FIRE from 2005. After attending the Quidditch World Cup with the Weasley family, Harry again heads for school and takes the Hogwarts Express.

Three magical schools compete against each other in the tournament, besides Hogwarts also Durmstrang and Beauxbatons. Students over 17 wanting to compete are invited to write their name on a piece of paper and put it in the magical Goblet of Fire which will select the participant of each school. When all champions are chosen, the Goblet of Fire unexpectedly comes up with a fourth name: Harry Potter. Although he is too young to enter the competition, he has to participate.

When the train arrives at the school in the early evening, the Glenfinnan Viaduct is seen for the last time in a Harry Potter-film. Just like during our visit the locomotive is black, in the second movie it was red. The beautiful overview of the viaduct with Loch Shiel in the background also shows Hogwarts Castle. Unfortunately, in reality there is no castle.