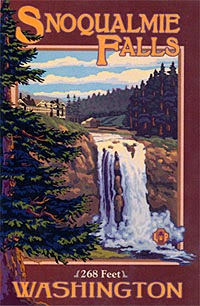 Just outside the town of Snoqualmie is the waterfall with the same name, for years a popular tourist attraction. In the series this location can be seen frequently, amongst others during the opening sequence. The large terrace offers a beautiful view on the 268 feet high waterfall. There is also a gift shop, but when we were visiting not a single item was being sold that was connected to the series.
The nearby hotel opened its doors in 1919 as the Snoqualmie Falls Lodge. During filming in 1989 the interior was being renovated and could not be used but the exterior can be seen in several episodes as The Great Northern. When the hotel was reopened it got its current name, Salish Lodge & Spa. A unique aspect of the hotel is that bees are being kept, their honey can be bought at the hotel shop. Snoqualmie is located about 25 miles southeast of Seattle.

Although it looks as if Snoqualmie Falls is part of a quiet landscape, in fact a highway runs next to it. The address of the Salish Lodge & Spa is 6501 Railroad Ave.


The road with the sign is Reinig Road, a sideway that is situated next to Snoqualmie River. In the background Mount Si is visible. In the years that have passed, the road has hardly changed, the spot where the sign once stood can still be recognized.


About 3 miles from Snoqualmie is North Bend. In this town Twede’s Cafe is located, Mar-T Cafe during shooting and renamed Double R diner for the television series. The building itself does not really standout, we passed it without noticing the first time despite the fact that “Home of Twin Peaks Cherry Pie” is painted on the facade. On the back of the building is a large mural painting of the road with the ‘Twin Peaks’-sign. The interior of the diner was used for the pilot episode as well. After a fire in 2000 it was complete renovated.


We would never have found these locations without In Twin Peaks, a website that has information on almost every location from the series.

The bus tour that visited locations from THE SOUND OF MUSIC (see Mondsee, Austria) ended at a parking place across Mirabell Castle, a palace that was built in 1606.

In the following years it was rebuild and restored more than once, the current building dates from 1818. The gardens were created at the beginning of the eighteenth century and have geometrical shapes. The statues, including the Pegasus fountain, represent figures from Greek mythology. In the movie several parts of the gardens can been during the song ‘Do re mi’.

The entrance is free which makes it almost impossible to make a photograph without tourists walking into the frame.


The river Salzach runs between the Mirabell gardens and the old city and can be crossed with the Mozart footbridge. In the movie the bridge, operative since 1903, can be seen during the song ‘My favorite things’.


The Mozartbridge offers a view on the Nonnberg Abbey that is situated above the other buildings. This is the abbey where the real Maria stayed and she was married here in 1927. The producers of the movie were not granted permission to film inside the abbey, they were not even allowed to look inside. Only the entrance and the outside of the church could be filmed and are seen when Maria leaves the abbey and when the children come to see her. The building is still in use as a convent.


On the same day the song ‘I have confidence’ was filmed at the Residenz Square Maria von Trapp and her granddaughter visited the set. At her request they were allowed to participate as extras in the scene when Maria walks from the Dom Square to the Residenz Square with the fountain with the sea horses. They walk behind Julie Andrews but are hardly visible. The square can be seen again at the end of the movie when the nazi’s have taken over the city. Like Mirabell gardens this place is crowded with tourists.


Two locations, both seen during the song ‘My favorite things’, appeared a bit different as compared to the movie. In front of the Salzburg Cathedral was a huge gallery with seats and the Pferdeschwemme was being restored and covered in scaffoldings. This monument at Herbert von Karajan Square once was a pond for horses, today it has statues and a facade with frescos of horses.


All locations in the old city of Salzburg are within walking distance. Just by accident we ran into the statue of the lion holding a shield. It is situated on top of a building at Max Reinhardt Square and is probably part of the university. It can be seen in the film during the opening sequence with the Kollegien Church in the background.


The Max Reinhardt Square is located next to the entrance of Toscanini Court which can be seen briefly twice in the movie, when Herr Zeller (Ben Wright) goes to the Von Trapp family during their rehearsals for the Salzburg Festival and when Rolfe (Daniel Truhitte) hands Liesl the telegram for her father.


The ride in the coach during the song ‘Do re mi’ was filmed in the Nonntaler Main Street, near the abbey. The coach passes amongst others the Eberhard Church of which only the stairs can be seen and a tobacco shop that still exists. In the meantime it had started raining heavily and we decided to return to our hotel. The rain would continue until the next morning.


The following day, before we left Salzburg, we made a quick stop at Frohnburg Castle, the villa of the Von Trapp family in the movie. The road that leads to it is still unpaved. Since the building was in a state of decline in 1964 it was completely painted especially for the movie. A fence was placed at the entrance and all the trees were trimmed. The villa belongs to the Mozarteum University and at their request is not part of the bus tour because busses full of tourists would certainly disturb the music lessons. We only took photos from the street, even though there was no one present.