In the opening scene of A VIEW TO A KILL James Bond (Roger Moore) is being chased in Siberia by Russian soldiers because of a microchip that he has recovered. The chase was not filmed in the Soviet Union - in the mid-80’s the Cold War was still in progress - but on the Swiss Alps and on the glacier lake Jökulsárlón in Iceland.

This lake, that developed naturally in the 1930’s, contains icebergs that drift towards the sea. The lake is situated at the head of the outlet glacier Breiðamerkurjökull which is part of Vatnajökull, an enormous glacier. This wonder of nature is located in the southeast of Iceland next to the highway and thus easy to access. James Bond finally escapes when he retreats into a submarine disguised as an iceberg, including a hatch with the Union Jack.

Because the glacier and the ice are constantly moving the lake looks different every day. Locations can be recognized by the contours of the mountains in the background. In the first picture the helicopter is exploding and the third picture shows the submarine navigating through the icebergs.

More than fifteen years later lake Jökulsárlón was again seen in a James Bond movie. DIE ANOTHER DAY is actually set in Iceland.

Tours are being organized on the lake with amphibious vehicles, more information on Glacier Lagoon. During our tour the guide also told about the shooting of the James Bond movies. The lake is connected to the sea and does not freeze because of the salt in the water. Especially for this film the lagoon was cut off from the ocean resulting in the lake being completely frozen.

Ultimately the ice was so thick that cars and other vehicles could easily ride on it, amongst others for the spectacular car chase between James Bond (Pierce Brosnan) and Zao (Rick Yune).

Email ThisBlogThis!Share to TwitterShare to FacebookShare to Pinterest
Labels: A View to a Kill, Die Another Day, Iceland - Jökulsárlón

The American comedy series WILL & GRACE lasted for eight seasons and debuted on 21 September 1998 on NBC. 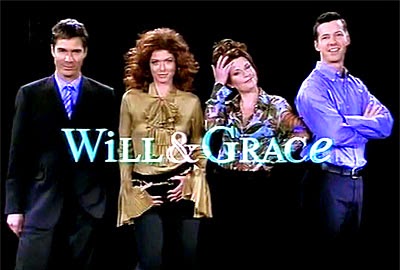 The last of 184 episodes was broadcasted on 18 May 2006. The show was seen in more than 60 countries and remains popular in reruns. Although largely filmed in front of a studio audience in Los Angeles, the show is set in New York. Several buildings in Manhattan are often shown to indicate where Will, Grace, Karen and Jack live and work. None of the four main characters however are ever seen entering or leaving one of these buildings.


The first shot of the pilot episode is 155 Riverside Drive in Upper West Side Manhattan, the apartment where Will lives on 9C, sometimes with Jack but in most episodes with Grace. The address is printed on the shed above the entrance.


The office of Grace Adler Designs is located in The Puck Building. The structure dates back from late nineteenth century and occupies a whole block. The front is at 293 Lafayette Street. Above the entrance and on the corner of Houston Street and Mulberry Street are statues of the character the red building was named after, Puck from Shakespeare’s ‘A Midsummer’s Night Dream’, sculpted by Henry Baerer.


In the second season Will becomes an employee of Doucette & Stein. This law firm has its office in the series in the UBS Building on 1285 Avenue of the Americas in the heart of Manhattan. Just across the street is Radio City Music Hall.

After years of preparation the musical EVITA by Andrew Lloyd Webber and Tim Rice was made into a movie by Alan Parker in 1996 with Madonna in the title role. She managed to get permission from the president at that time Carlos Menem to film in the historic Casa Rosada in Buenos Aires on 10 March.

Here the real Eva Perón spoke to the people from the balcony. The building at the Plaza de Mayo is still in use as the official office of the president but during weekends it is open to the public with free tours of one hour in Spanish and English. Even the office of the current president is included, this is also the only room where it is not allowed to make photographs.

Casa Rosada (‘Pink house’) was named after the colour of the building. In the movie the monumental structure is only seen at night and thus the colour pink is not seen.


The balcony is not part of the tour but the adjoining room is. It gives the visitor an impression of the view that both Eva Peron and Madonna must have experienced.


Not in the movie but part of the tour are several rooms dedicated to Eva Perón. In Argentinia she is both loved and the subject of controversy, since 2012 her portrait is on a 100 peso bill.

Searching for suitable locations for ON HER MAJESTY'S SECRET SERVICE, the film’s art directors were looking for a luxurious accommodation high in the Swiss Alps to serve as the secret location of James Bond’s arch enemy Blofeld. When they found out about a revolving restaurant being built on top Mount Schilthorn in the canton of Bern nearly 3000 meters high, it turned out to be the ideal place.

The building was designed by the architect Konrad Wolff. For 3 million Swiss francs the movie company was allowed to use the restaurant before its opening to the general public.
The interior of the restaurant and the helicopter platform had to be paid by them as well. Principal shooting started on 21 October and ended on 21 December 1968.

The memory of James Bond and the shooting of the movie is still being kept alive, starting in the valley at the ticket machine. The journey goes up in four sections (Stechelberg - Gimmelwald - Birg - Schilthorn) in 30 minutes and gets the visitor in the mood with music in the gondolas and the 007-logo on the ticket and in the buildings, amongst others.


In the movie Piz Gloria is owned by Draco Blofeld (Telly Savalas) who poses as count Balthazar of Bleuchamp. James Bond (George Lazenby) in his turn pretends to be genealogist Sir Hilary Bray.
The day of our visit started with heavy clouds and Piz Gloria - the restaurant maintained the name from the film - was hardly visible.


We decided to go to the interactive exhibition Bond World first which was opened on 28 June 2013 by George Lazenby himself, in person (see also this report on YouTube). Here the history and the making of the film is being told. Images from the movie can be seen and the original script is on display.


Very recognizable from the film is the coat of arms of Bleuchamp with eagles, boars and the motto ‘Arae et Foci’ (loosely translated as ‘Heart and home’). The coat of arms was made by production designer Syd Cain in cooperation with the British College of Arms.
The original design by Syd Cain is part of the exhibition ‘Designing 007 - Fifty years of Bond style’ which has travelled to London, Toronto, Shanghai, Moskou, Madrid and Rotterdam, amongst others. Unfortunately, the drawing has not been included in the exhibition’s catalogue.

In the movie it is located right of the gondola station and left of the building's entrance which nowadays can only be recognized by the setting of the doors. The restaurant is not that interesting with a menu that lacks imagination, you can order “spaghetti James Bond”.


From the original interior design only the fences along the stairs remain, unfortunately it was decorated with stones from the souvenir shop. All other scenes inside the building where made in the studio. The restaurant has two revolving rings, the best seats are of course at the window and within the hour a 360° turn has been made.


In the meantime, most of the clouds were gone and we went outside. The helicopter platform has been replaced by a panorama terrace, including life-size silhouettes of James Bond. On the terrace the curling scenes with the “angels of death” were made, are Bond and Blofeld meeting and Piz Gloria can be seen very well in the background.


The name in orange has disappeared as well as the sign that reads ‘Versöhnung der Technik mit der Natur’ (‘Reconciliation of technique and nature’), the concrete was covered with wooden panels in 1990. On the third photo the text is visible in the left upper corner. 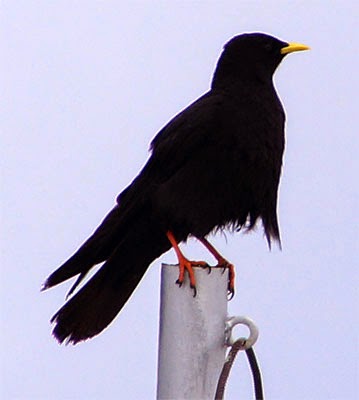 Also during the curling game Shaun Campbell, a secret agent who wants to help James Bond by climbing from Birg to Piz Gloria, is being discovered. While climbing the mountain, his presence is being revealed by the alpine choughs. These black birds with yellow bill and red feet can still be seen around Mount Schilthorn and seem to be accustomed to people.

Besides the gondola it is also possible to descend the mountain by hiking or skiing, just like James Bond. For more information, go to Schilthorn Piz Gloria.

The souvenir shop sells 007-items but it is not much interesting, we bought a postcard and a special issue of the German James Bond-fanclubmagazine from 2001.
More interesting is a 30 minute episode of Dutch documentary series Andere Tijden on this movie, including a visit to Piz Gloria with production manager Hubert Fröhlich from the twelfth minute onwards. It is Dutch spoken but all interviews are in English, including director Peter Hunt just a few weeks before his death in 2002. 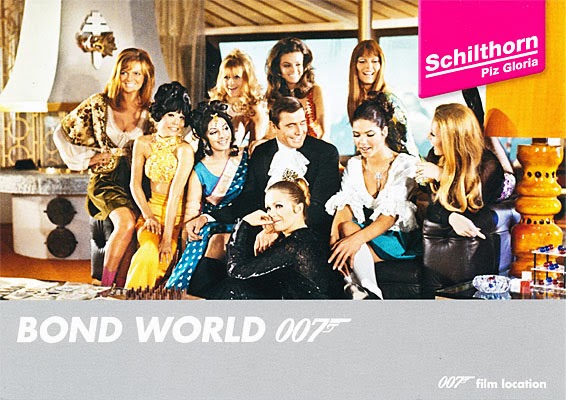