In the Christmas special of the fifth season of DOWNTON ABBEY, ‘A Moorland holiday’, the Crawley family pays a visit to the family-in-law of lady Rose in the autumn of 1924. They have been invited by Lord and Lady Sinderby to hunt pheasants and stay at Brancaster Castle. 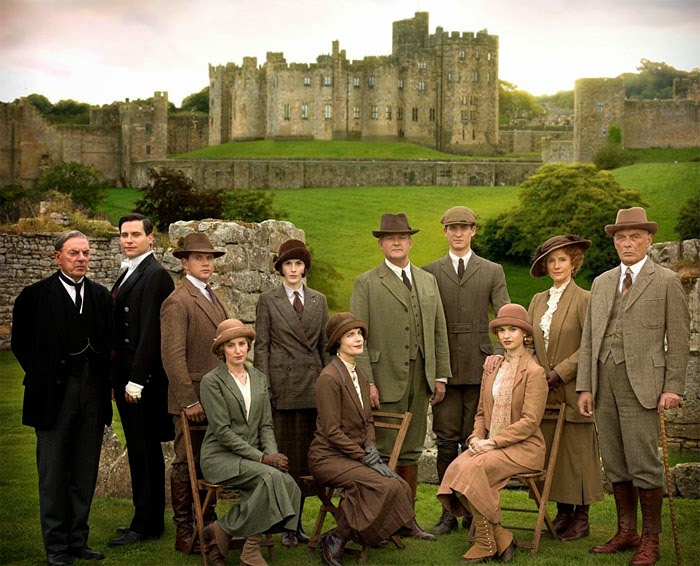 This episode was broadcasted first by ITV on 25 December 2014 in the United Kingdom and by PBS on 1 March 2015 in the United States. Brancaster Castle is Alnwick Castle in real life, a location seen in more than 30 films and television series. The website of Alnwick Castle lists all titles, including information for future filming opportunities. Filming for Downton Abbey took place in July and August of 2014 in and around Alnwick, including a local high school that was temporarily transformed into a pub, ‘The Crown and Anchor’.

We visited the castle three years earlier, amongst others because it is featured in Harry Potter and Robin of Sherwood. Some of the photos that we took are similar with the images that as seen in this episode.

In the first scene Lady Mary (Michelle Dockery) goes to the prison of York by taxi to visit her maid Anna (Joanne Froggatt). The entrance of the prison is actually the main entrance of Alnwick Castle. This scene was filmed on 4 August 2014.


Alnwick Castle can be seen from various views and is photographed beautifully. The presence of the filmcrew has resulted into an exhibition of the series in 2015 at the castle, including a groups-exclusive tour of the State Rooms as seen in the Christmas special.

The first and second episode of ROBIN OF SHERWOOD (American title: Robin Hood) are partially set in the castle of Notthingham (see also: Bamburgh Castle) where Robin (Michael Praed) and his friends are imprisoned, manage to escape but later return, in disguise, to participate in an archery contest.

These episodes were first broadcasted on 28 April 1984 as a two hour special. Filming was done all over England in the early ’80s. The exterior of Alnwick Castle in Northumberland was chosen as the castle of Nottingham. Although the history of this landmark goes back to the eleventh century, the current construction was mainly built in the fourteenth century. It is still home of the Duke of Northumberland and his family. Eight months of the year, from March until October, it is open to visitors. See the website of Alnwick Castle for details.

The Inner and Outer Bailey of the castle can easily be recognized. In the first episode, ‘Robin Hood and the sorcerer - part 1’, Robin Hood and his merry men are being captured and locked away in a dungeon. They find a way out and enter the courtyard where a market is being held. Although their escape is being discovered quicky, they manage to flee to Sherwood Forest.


In an attempt to capture Robin Hood again, the sheriff of Nottingham Robert de Rainault (Nickolas Grace) organizes an archery contest in the second episode, ‘Robin Hood and the sorcerer - part 2’. The winner will receive the Silver Arrow, a precious and ancient trophy. Robin wins the tournament, dressed as an old man. When he receives his price, his hands betray his real age and identity. With the help of his men he escapes the castle a second time. The scenes of the contest were all filmed at the Outer Bailey. Note in the first screenshot that two lights have been camouflaged with hay (for the horses?).


In episode 5, ‘Alan a Dale’, another market is being held at the castle of Nottingham. These scenes were probably filmed at the same time as the escape from the dungeon in episode 1. The castle is hardly visible and can only be seen in the background during a few brief moments.


Alnwick Castle can be glimpsed briefly in the third episode, ‘The witch of Elsdon’, when Sir Guy of Gisburne (Robbert Addie) and his soldiers try to find Robin and his friends. They leave the castle through the Lion Arch.